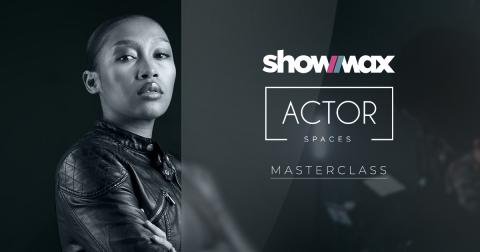 The Showmax and Actor Spaces partnership has premiered masterclasses every second Thursday on YouTube to empower the industry.

For its fifth instalment, the masterclass hosted Bokang Phelane, on playing the lead role in the action-packed series Blood Psalms. Bokang unpacks her role in the series as Princess Zazi, daughter of the mad king Letsha. In Showmax’s biggest and most ambitious series yet, she battles a world-ending prophecy to navigate her people through ancient curses, long-standing tribal vendettas and the wrath of the gods.

She shares her experiences playing the lead in a heavyweight cast, and she also takes about how intense being an action lead can be, in this role of a lifetime.

Each masterclass is followed within a week by an Instagram Live for aspiring actors to ask the featured speaker follow-up questions.

Look out for new masterclasses every second Thursday on Showmax’s YouTube page and the Instagram Live available a week after the premiere, the live session allows aspiring actors to ask the featured speaker follow-up questions after watching the masterclasses